Ben Pakulski, one of the world's most well-known IFBB bodybuilders, has been coming to MAT® Headquarters to see founder, Greg Roskopf, for over 3 years. They have worked together through aches, pains, injuries, and breakthroughs. They are a pair that share a passion for muscular development and movement. Both men have dedicated their lives to creating and maintaining powerful muscular systems, and believe that MAT® is the key tool to achieving this goal.

IFBB Pro, Ben Pakulski developed a curiosity for the human body at a young age and has been focused on building muscle ever since. Ben began weightlifting at Macks Gym in Toronto at age 15 and secured his first MuscleTech contract at 18. He was trained by Tom Hall, who gave him insight into the biomechanics of all of the exercises he was performing helping to further Ben’s interest in the science behind his training. Ben was also inspired by the late Peter Chiasson, who focused his professional studies on kinesiology. After learning from Hall and Chiasson, Ben’s passionate, intelligent, and educated approach to optimizing his bodybuilding is what allowed him to compete professionally since 2007.

Ben and Greg began their partnership in 2013 and since then Ben has seen incredible success using Greg Roskopf's Muscle Activation Techniques®. A major focus for bodybuilders is to optimize muscle function and development. Ben has found that MAT® is able to provide the answers he was seeking for those stubborn muscles that aren’t performing properly. The high volume and intensity at which professional bodybuilders must train day in and day out can certainly take a toll on the muscle system. In particular the heavy loads these athletes train under can impair the communication between the nervous system and the muscles being worked. In order to have a symmetrical physic, bodybuilders need full-body muscle contractile efficiency. Where muscles can't contract efficiently, they aren't able to shorten efficiently; therefore muscles are not isolated during a workout, which is vital to the profession. 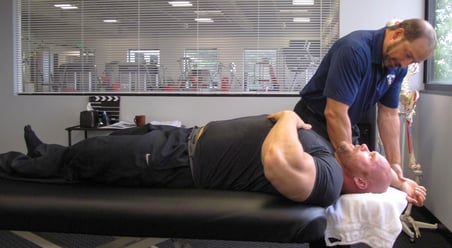 We have been following Ben's progression throughout his visits to Denver, Colorado. Shortly after the 2016 Mr. Olympia competition in Las Vegas, Ben came out for a session with Greg. They worked on a full body recovery treatment to ensure that his muscle contractile efficiency was restored.

To hear from Ben himself about his last visit, click here to watch him explain how Muscle Activation Techniques® has helped aid in his development throughout his successful body-building career!