“Compensating" is a term that people in the health and wellness industry hear thrown around daily. In our case, it has nothing to do with how much money one earns but rather it references a unique and yet confounding “skill” that the human body deploys when it senses an injury or instability in a part of the body.

Compensating, in a general sense,  is an innovative way that the body adapts to a misaligned musculo- skeletal movement pattern.  This compensation is part of an effort by the body to help this misaligned movement become less of a short term movement risk to the body.  It could be better stated that compensation isn’t really a "skill" but rather a symptom of an issue in the body.  Compensating helps the body get by until the root of the real movement misalignment is addressed.  Think of it similar to if your cars wheels are out of alignment. The mechanic observes this and tells you that there is an issue. You may choose to address the issue now or you can continue to drive your car for a while, while its’ out of alignment. The faster, longer, and harder you drive your car, eventually the misalignment will begin to increasingly wear down the tires and likely cause more and more ancillary problems until your car will no longer function correctly. The same thing happens to our bodies. Pain is like the sensor light (or the mechanics observation) for your car, telling you that there is a problem. As you continue to work out and stress your body, you may feel worse and worse until your body can no longer compensate for your these misalignments. Sound familiar?  We have heard people comment on the fact that the feel like they have a small "Hitch" in their gait or it feels that when running, their stride is out of alignment in each scenario, it is a case of compensating movements. 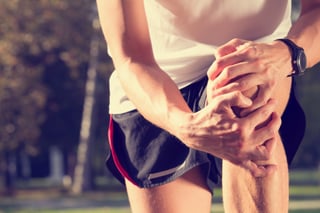 When my brother was eighteen, he had surgery on his right hip. Ten years later, he is running marathons and competing in triathlons. Although he is able to run at a competitive level, his hip injury still affects him. Ironically, it is not his right hip that hurts when he runs; he now has a chronic left calf pain due to his soleus. For the last two years, he periodically saw a physical therapist for the strained muscle. Unfortunately, simply addressing the strained muscle was not preventing the soleus injury from recurring. He needed to address the root cause – compensation for his right hip.  (and thus the corresponding issue of his stride being out of alignment).

His right hip is constantly "tight". In MAT™ terms we could call this inefficient muscle contractile efficiency. When he first began Muscle Activation Techniques™ his muscle contractile ability and left calf tested what MAT™ calls “strong” (We will tell you more about the MAT™ jargon in a future post), yet he had limited hip flexion in his right hip. MAT™ has helped improve his range of motion and meanwhile address the limitations with the muscles in his right hip. By improving his hip, his soleus no longer needs to compensate for his hip’s weakness. MAT™ and understanding the inter connectedness nature of the muscular system is crucial in addressing chronic injury and compensating movements.

If you really stop and think about it, tightness and some of those nagging pains are  likely indications that the body is overcompensating, and we have all experienced that to some degree. If you look at it through the Muscle Activation Techniques™ philosophical approach, stretching may not be the best way to address tight muscles. Tightness and weakness, like compensation, are viewed by MAT™ as symptoms of poor muscle contractile efficiency. But, you don’t have to be a competitive runner like my brother to experience compensation.

A person’s stance can tell you quite a bit about how their body is potentially making up for weakness elsewhere. Personally, I “toe out” when I walk and my friends tease me for being “duck footed.”  Interestingly enough, from an MAT perspective, my toeing out may have more to do with my hips than my feet. Even though I am teased a bit for walking with my feet turned out, it is the position that my body feels the most stable in. Remember when I said that compensation is a good thing? MAT™ helps improve my lower body’s neuromuscular connection; as my muscular contractile ability is enhanced, more of my muscles are able to function appropriately; and, my feet naturally begin to straighten as I walk when all of my muscles are firing correctly.