As you may already know Greg Roskopf, founder and developer of MAT®, is a huge lover in all things bacon. So we decided to set the stage for a couple fun facts about Bacon to change things up for our readers and make sure to check out the bacon recipes at the end!

#1: Oscar Meyer brought sliced bacon to the shelves in 1924! 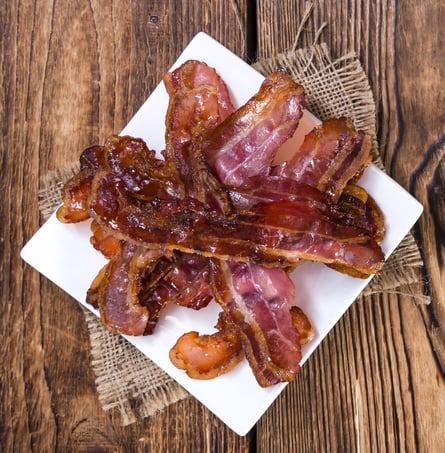 #2: The formula for a Bacon Cologne was created in 1920 by a Parisian Butcher named John Fargginay.

#4: Each year in the U.S. more than 1.7 billion lbs of bacon is consumed in the food service - that is same weight as 8.5 nimitz class aircraft carriers

#6: Bacon actually dates back to 1500 BCE. Bacon is considered one of the world's oldest meats due to the Chinese salting pork bellies and cooking them more than 3000 years ago!

#7: The word bacon refers to the "back" of a pig. "The word "bacon" comes from the Germanic root “-bak,” and refers to the back of the pig that supplied the meat. "Bakko" became the French "bacco," which the English then adopted around the 12th century, naming the dish "bacoun." Back then, the term referred to any pork product, but by the 14th century bacoun referred specifically to the cured meat."

#8: Bacon helped make explosives during World War II. Households were encouraged to donate their bacon grease to the war effort; given the fats in bacon created glycerin, which in turn created bombs, gunpowder, and other munitions.

#9: Only 11% of standard pig's weight is bacon - roughly 20 lbs of bacon comes from a 200 lb pig, depending on how the butcher processes the meat.

#10: Bringing home the bacon didn't originally relate to money... "In the 12th century, a church in Dunmow, England, offered a pack of bacon to any man who could attest to God and everybody that he had not fought or argued with his wife in a full year and a day. Anyone who could say that they brought home the bacon was very respected and had a reason to feel a great amount of pride. "